From ReliaWiki
Jump to navigation Jump to search

In life data analysis and accelerated life testing data analysis, as well as other testing activities, one of the primary objectives is to obtain a life distribution that describes the times-to-failure of a component, subassembly, assembly or system. This analysis is based on the time of successful operation or time-to-failure data of the item (component), either under use conditions or from accelerated life tests.

In system reliability analysis, one constructs a "System" model from these component models. In other words in system reliability analysis we are concerned with the construction of a model (life distribution) that represents the times-to-failure of the entire system based on the life distributions of the components, subassemblies and/or assemblies ("black boxes") from which it is composed, as illustrated in the figure below.

A system is a collection of components, subsystems and/or assemblies arranged to a specific design in order to achieve desired functions with acceptable performance and reliability. The types of components, their quantities, their qualities and the manner in which they are arranged within the system have a direct effect on the system's reliability. The relationship between a system and its components is often misunderstood or oversimplified. For example, the following statement is not valid: All of the components in a system have a 90% reliability at a given time, thus the reliability of the system is 90% for that time. Unfortunately, poor understanding of the relationship between a system and its constituent components can result in statements like this being accepted as factual, when in reality they are false.

Block diagrams are widely used in engineering and science and exist in many different forms. They can also be used to describe the interrelation between the components and to define the system. When used in this fashion, the block diagram is then referred to as a reliability block diagram (RBD).

A reliability block diagram is a graphical representation of the components of the system and how they are reliability-wise related (connected). It should be noted that this may differ from how the components are physically connected. An RBD of a simplified computer system with a redundant fan configuration is shown below.

RBDs are constructed out of blocks. The blocks are connected with direction lines that represent the reliability relationship between the blocks.

A block is usually represented in the diagram by a rectangle. In a reliability block diagram, such blocks represent the component, subsystem or assembly at its chosen black box level. The following figure shows two blocks, one representing a resistor and one representing a computer.

It is possible for each block in a particular RBD to be represented by its own reliability block diagram, depending on the level of detail in question. For example, in an RBD of a car, the top level blocks could represent the major systems of the car, as illustrated in the figure below. Each of these systems could have their own RBDs in which the blocks represent the subsystems of that particular system. This could continue down through many levels of detail, all the way down to the level of the most basic components (e.g., fasteners), if so desired. 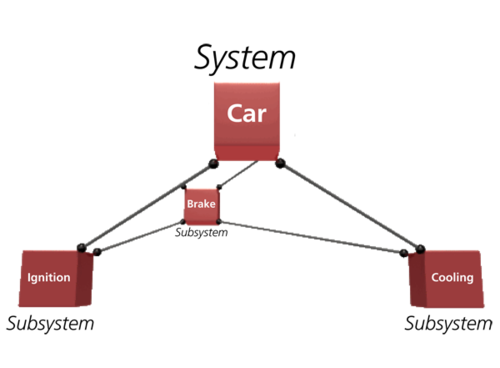 Having segmented a product or process into parts, the first step in evaluating the reliability of a system is to obtain life/event data concerning each component/subsystem (i.e., each block). This information will allow the reliability engineer to characterize the life distribution of each component. Data can be obtained from different sources, including:

Additionally, component life data may also be provided by the manufacturer or supplier of the component/subsystem. Once the data set has been obtained, the life distribution of a component/subsystem can be estimated using ReliaSoft's Weibull++ or ALTA software. For example, consider a resistor that is part of a larger system to be analyzed. Failure data for this resistor can be obtained by performing in-house reliability tests and by observing the behavior of that type of resistor in the field. As shown below, a life distribution is then fitted to the data and the parameters are obtained. The parameters of that distribution represent the life distribution of that resistor block in the overall system RBD. 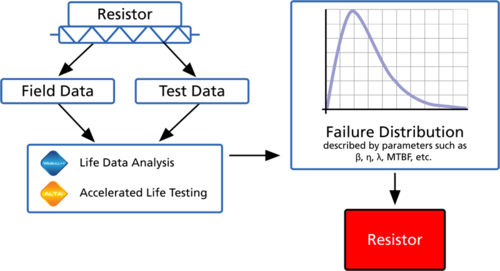 In the same manner, other types of information can also be obtained that can be used to define other block properties, such as the time-to-repair distribution (by analyzing the times-to-repair of each block instead of the times-to-failure), other maintenance requirements, throughput properties, etc. These block properties can then be used to perform a variety of analyses on the overall system to predict and/or optimize the system's reliability, maintainability, availability, spare parts utilization, throughput, etc. 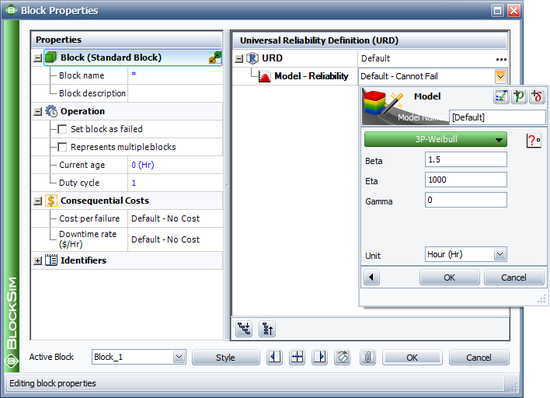 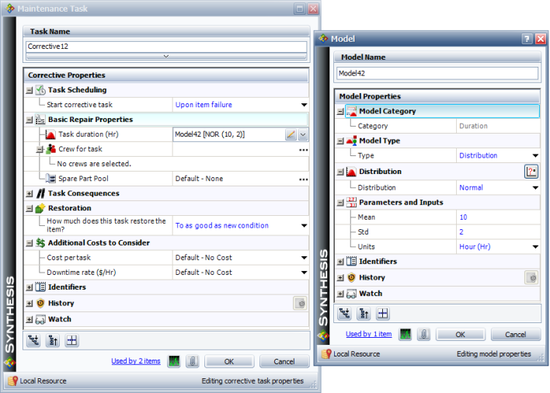 Systems can be generally classified into non-repairable and repairable systems. Non-repairable systems are those that do not get repaired when they fail. Specifically, the components of the system are not repaired or replaced when they fail. Most household products, for example, are non-repairable. This does not necessarily mean that they cannot be repaired, but rather that it does not make economic sense to do so. For example, repairing a four-year-old microwave oven is economically unreasonable, since the repair would cost approximately as much as purchasing a new unit.

As shown in the figure below, BlockSim includes two independent computation modes: analytical and simulation. The analytical mode uses the exact reliability solutions for the system, employing the system's reliability function or cumulative density function (cdf). BlockSim can resolve even the most complex systems analytically and this method should be used when one is performing reliability analysis. In the context of BlockSim and this reference, we use the term reliability analysis to refer to all analyses that do not include repairs or restorations of the component. In contrast to the analytical mode, the simulation mode takes into account repair and restoration actions, including behaviors of crews, spare part pools, throughput, etc. Both of these methods will be explored in the chapters that follow. 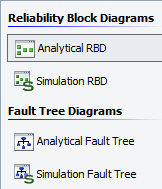 When considering only the failure characteristics of the components, the analytical approach should be used. However, when both the failure and maintenance characteristics need to be considered, the simulation method must be used to take into account the additional events.

In the analytical (or algebraic analysis) approach, the system's pdf is obtained analytically from each component's failure distribution using probability theory. In other words, the analytical approach involves the determination of a mathematical expression that describes the reliability of the system in terms the reliabilities of its components. Remember also that [math]cdf(t)=1-R(t)\,\![/math] .

The advantages of the analytical approach are:

The disadvantage of the analytical approach is:

Static analytical calculations are performed on RBDs that contain static blocks. A static block can be interpreted either as a block with a reliability value that is known only at a given time (but the block's entire distribution is unknown) or as a block with a probability of success that is constant with time. Static calculations can be performed both in the analytical mode and the simulation mode. The following figure illustrates a static RBD. 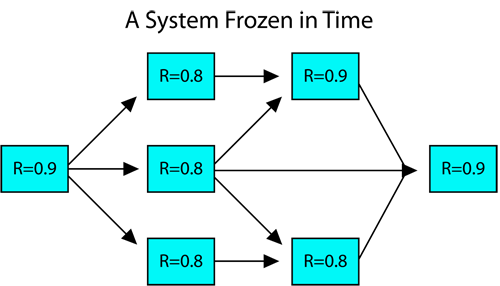 Time-dependent analysis looks at reliability as a function of time. That is, a known failure distribution is assigned to each component. The time scale in BlockSim can assume any quantifiable time measure, such as years, months, hours, minutes or seconds, and also units that are not directly related to time, such as cycles or miles of use. In many of the discussions and examples that follow, and to maintain generality, time units may be omitted or a general time unit ( [math]tu\,\![/math] ) may be utilized. It is very important to remember that even though any time unit may be used, the time units used throughout an analysis must be consistent in order to avoid incorrect results. The primary objective in system reliability analysis is to obtain a failure distribution of the entire system based on the failure distributions of its components, as illustrated below. 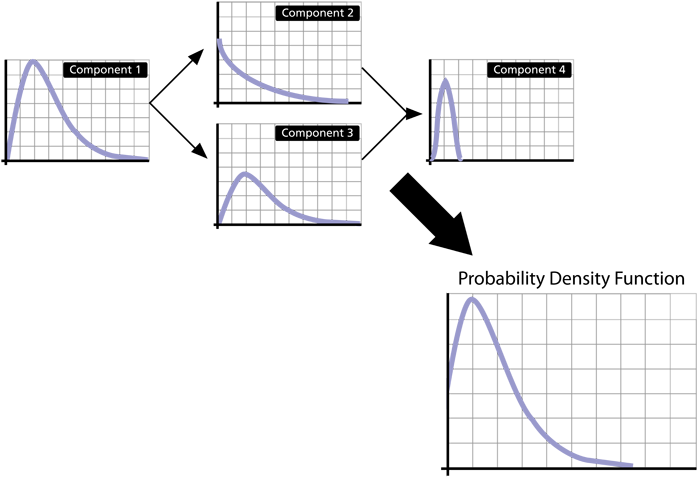 If one includes information on the repair and maintenance characteristics of the components and resources available in the system, other information can also be analyzed/obtained, such as system availability, throughput, spare parts usage, life costs, etc. This can be accomplished through discrete event simulation.


In simulation, random failure times from each component's failure distribution are generated. These failure times are then combined in accordance with the way the components are reliability-wise arranged within the system. The overall results are analyzed in order to determine the behavior of the entire system.


The advantages of the simulation approach are:

The disadvantages of the simulation approach are:

Simulation is discussed in the Repairable Systems Analysis Through Simulation and Throughput Analysis chapters.